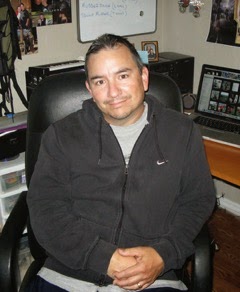 Steve and Kelly Brase first came to our attention because of their blog’s name,”Orange is the New Blog.”  Kelly is serving a three-year prison sentence & writes of her experiences from prison, even as life has changed significantly for Steve and their two children at home in California. We asked Steve to share his story with prisonist.org in our mission to bring compassion and light to people who suffer in silence. – Jeff
__________

My name is Steve Brase, on 9/23/14, my Wife (Kelly) was sentenced to a 3 year stay in the California Department of Corrections. She leaves behind our Son (12), our Daughter (18), along with myself.

3 months leading up to her sentencing was a roller coaster of emotions. There were 3-4 continuances and a suicide attempt that landed Kelly in a hospital. Kelly’s flawed mental state at that time thought that we would be better off financially if she weren’t around. This was devastating to us. These were extremely dark days for our family. We were very thankful that she was found and hospitalized. She was able to start the treatment she needed so badly.

When she was sentenced, it was sad but also a relieved feeling. We had been through so much already. It felt good to get that part of the process over. But, little did we know, how hard it would be.

The first few days after sentencing, my family was just numb. After the numb feeling faded, the hurt came in. My Daughter shut down. Didn’t want to be at home much. Her Mom was her best friend. Her rock. She felt like she had no one to talk to. I attempted to talk to her, but in reality, I’m just not Mom. I try and quite honestly, I would do anything for her to feel happy again. My Son was very confused. He understood that Mom is gone for a while. But, he has no idea how 3 years will feel. He seems to be handling it well. But, I do know, that when things get quiet around him, he will be thinking about Mom. How can he not ? I have seen him in the backseat of our car staring out the window while I’m driving. I know what he’s thinking about. Sometimes he will share and other times not. We do talk about Kelly a lot. It’s always a nice conversation. He holds onto the promises that his Mom has told him on all the things they will do when she gets home. I know Kel and she will definitely keep all of them.

You know, since all this has happened, I have changed tremendously. I never think of myself first anymore. I am so concerned with attempting to keep a stable home life for my kids, keeping the lights on, and food on the table. It has been a struggle. But, I’m getting there. I believe my cooking skills have been getting better ! To hear a “mmm, that’s really good Dad” really keeps me going. It’s the little things. I do believe that my kids and I have gotten closer. My Daughter still isn’t home much, but we communicate well. Even attending a group therapy a couple of times a month. I realize how hard it is and I do feel very bad for her, especially it being her first year in college. All this hit right about when school started. She struggled badly. Just no motivation. Her Mom could always talk her back into it and give her the direction she needed. Kelly was just incredible at doing that. I need to learn how to. But, we were very blessed. My Sister in Law (Kelly’s Sister), who is a teacher, stepped right in and helped. She helped my Daughter get back on track. She is still helping her. She is amazing. Our whole family has been very supportive. All the support took me by surprise. It took Kelly by surprise too. She told me she never realized how much her family cared. They followed her to her darkest moment and helped pick her up. This whole nightmare has taught us all about life. What’s really important and what’s not. My kids have seen and heard so much in the past few months while visiting their Mom at Los Colinas (County Jail). They have seen the reality of drug abuse and homelessness. We have seen women that have no teeth because of meth abuse, women coming down from heroin, women that have been physically abused,  and prostitution. We have seen the kids that line up with the rest of us coming to see their Mom’s. The Grandma’s with their Daughter’s infant kids coming to see their Mom’s. It’s just so sad. There has to be be a better way. My Wife constantly talks about starting her own foundation for second chances for women when she gets home. She has so many ideas. She talks often about how there has to be a way to “break the chain” from having these women return to prison. Giving them the support they need inside and outside of the walls. She talks about how there are so many single Mom’s and how they don’t have a lot of family support. She wants to be able to help them find jobs, training, and counseling. A lot of the jails and prisons talk about having “re-entry” programs. But, I have done a lot of research and have not seen much, if any. My Wife talks about having a program that actually identifies the inmates reason for being there. Not just rehab for a drug problem. But, maybe there is a reason for the drug use. Abusive relationship, co-dependent? These are some of her ideas while she sits in her cell. She definitely isn’t wasting her time in prison. She promises us that she will not give up and she will come home the same Mom and Wife she was before, but better. I believe her.

While she’s been in, I have started a blog for her. She writes to me and she shares her journey. It’s all her. Her words. It’s pretty amazing, sad, frightening, and motivating. It’s therapeutic for both of us. After writing it for about a week, I took to Twitter to get it out there. I had no idea all the amazing people out there “fighting the fight” for reform. It’s been an eye opener. I have been in contact with some wonderful people. People that I have never met but communicate with me about my Wife and family. Just incredible. There are so many incredible groups out there that want change to the system. I want change also. It’s not just because my Wife is incarcerated either. The stories I’ve read, the people we’ve seen, it just heartbreaking. Sometimes I think if we can just get more people aware of what’s really going on, maybe that would generate more interest in change. To be honest, I really had no idea how overcrowded prison was, how there was “prison for profit”, or how there were no real programs for mental health while incarcerated, until now. I wish I would have. I have now joined the the fight for prison reform. Just wished I could have started sooner. But, I’m here now.

As my family waits for my Wife to be transferred to a mainstream Prison, we try and prepare mentally for whatever the next “challenge” will be in this journey. Questions like, where will she be ? Will she be safe ? How far ? Can we afford to visit her ? Can we afford to support her ? It can be a tidal wave stress. But, we’ll make it work. I had a friend recently ask me “How do you do it ? How do you not give up ?” My answer to him was “How ? There are days that hurt more than others. They can seem impossible. But, giving up is not and never will be an option. That’s just not what you do when you have kids and a family. You dig deep and you make it work. That’s it” So, we keep moving, waiting for letters from Mom, and maybe a phone call. We stay strong for her and she does the same. Do things get easier with time ? No, you get stronger.

There ain’t no skiing in jail

Guards and barbs. Shut the door
Excluding us. From nowhere
Endless searches. All the time
Pockets, shirts, legs. Find nothing

Erratic calls. To start work
No work, no calls. No reason
Food is warm. Food is cold
Menu’s right. Sometimes not

It’s not to think. It’s worse
Go numb. Stop thinking
There ain’t no skiing in jail. Just sweet memories
Of the past. And some hope for tomorrow