Down and Out in Greenwich: 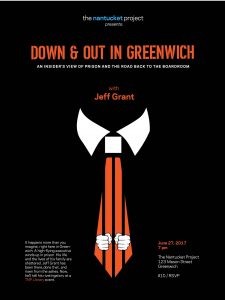 Greenwich, CT – (June 20, 2017) – It happens more than you imagine. A high-flying executive makes a fateful decision and winds up in legal trouble. He’s sentenced to time in prison and his life and the lives of his family are shattered.

Next week, The Nantucket Project presents Down & Out in Greenwich: An Insider’s View of Prison and the Road Back to the Boardroom. On Tuesday, June 27 at 7:00 PM, Jeff Grant will share his story about prison life and his difficult road back to life after incarceration. TNP Library, 123 Mason Street, Greenwich. Grant was a Main-Stage Presenter at The Nantucket Project in 2013.

In Grant’s personal account, the audience will hear full details about a few poor decisions, what life is like in prison, and how one man has been able to successfully navigate a course to become

the first person in the country, who was incarcerated for a white-collar crime, to be named the head of a major criminal justice nonprofit. He has methodically rebuilt his

life, personally and professionally, and was recently named the Executive Director of Family ReEntry, a nonprofit leader that supports families affected by the criminal justice system. He has been the subject of articles in regional and national media and has received numerous business and service awards.

Grant said, “I want my story to be a cautionary tale, but I also want anyone affected by the criminal justice system to know that there is hope and help after prison.” “I am grateful to The Nantucket Project for its support and leadership in justice reform.”

Currently, there are over 2.3 million people incarcerated in the United States and over 70 million with criminal records. Nearly 11,000 individuals will be released in Connecticut this year. “It is vital that we reach these individuals at critical junctures in their lives and provide them with enough support so that they can have every
opportunity to achieve, learn and grow as citizens who are not forced to return to the kind of activity that caused them to be incarcerated in the first place,” said Grant.

To learn more about attending the upcoming presentation at The Nantucket Project,
https://nantucketproject.regfox.com/jeff-grant-tnp-library-event


Family ReEntry is a 501c3 nonprofit, which was founded in 1984 as a reentry support group for men at the Isaiah House in Bridgeport. It has since grown to include policy advocacy, and intervention, prevention, in-prison, reentry, fatherhood and youth & family programs. Over the past 33 years, effective advocacy efforts and community-based programs developed by Family ReEntry have significantly reduced the likelihood that clients will re-offend, be re-arrested, or be re-incarcerated. Its programs provide a spectrum of services designed to disrupt the intergenerational cycle of incarceration. Family ReEntry addresses the specific needs of each client and their families through individualized case management and support services. It works to create a positive social network for each client, helping make their transition from prison back into the community a successful, self-sufficient one, while strengthening their families and the community. Family ReEntry operates its programs in strategic locations that encompass eight municipal regions and judicial geographic areas, two parole districts and five prisons. Approximately, sixty-percent of those served by Family ReEntry are from greater Bridgeport – Connecticut’s largest city. The organization has offices in Bridgeport, Norwalk and New Haven, CT. Programs are also held in Stamford, Waterbury, Derby, New London and Norwich, CT. More information is available at www.FamilyReEntry.org and on its social media including, Facebook, Twitter, Pinterest, Instagram and YouTube